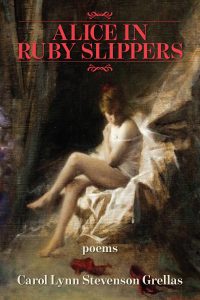 I’m a fan of poetic forms. Haiku. Sonnet. Pantoum. The elusive sestina. I think there is something magical that happens when a poet jumps into a scaffolding. The scaffolding lifts us, readers and author, to unique connections and dramatic conclusions. Which makes Alice in Ruby Slippers, a collection of poems by Carol Lynn Stevenson Grellas, an unexpected adventure. The mixing of tales in its titles signifies we’re going on a journey of what we think – on entirely new and independent paths, devised by Grellas, just as she’s modifying the poetic forms to suit her voice and her plan for her poems. Lured by the promise of familiar sonnets and other poems, I’m granted entry into a world of Grellas’ imagination.

What are the elements that make this journey wild and wonderful? Let’s talk about rhyming. Rhyme is a traditional component of many poetic forms. What makes rhyme special, I think, is the expected connections and clever use of language as well as the emphasis on the sound of your poem. In her poem, “Without Vision,” she writes: “a secret illness writes itself in Braille / soundless as the unseen breath of trees, / it lives, grows, sighs and breathes within / the shadow of the body’s fleshy veil” (73). These lines are jammed with exciting rhyme. The end-rhymes, the middle of the line rhymes. My favorite is the hardworking rhyme of trees/breathes which replicates the soft sighs immediately preceding it. The rhyme that works like this embeds the reader in the experience of the poem.

Grellas makes sound a foundation of her poems. In “On Underestimating the Aftermath,” Grellas writes about a daughter caring for dying parents. Despite the daughter’s hard work and knowledgeable caretaking, the grief and loss are profound. “But when dying was over, their eulogy read … / there was no one to tell me, good girl. They were dead,” (71). In the repetition of single syllables and the final simple three words, Grellas draw out the experience of a huge loss and finality of that singular loss. In “Since You’ve been Gone,” sound is the central component of the poem itself. Whether it's music that reminds the narrator of the passed person or how they “play / old messages to hear your voice again –“ (19) Grellas reminds us the sound evokes emotions and deftly wields sound to guide us through her poetic constructions.

Grellas also uses sound and rhyme and rhythm to reveal the speechless, soundless, almost sacred moments in life. In “The Cancer Diagnosis” a couple waits for information and Grellas documents the time “when nothing said conveys all thoughts repressed,” (24). Or in “The Sequoia,” Grellas writes about a moment of transcendence in the landscape, “through bars of golden beams across the sod, / she disappeared forever on the day / communion with a tree brought her to God” (46). The rhyme of sod and God spans the same space of the sacred communion that can make one disappears. Grellas’ words hold the space that sound cannot truly describe.

In the end Grellas challenges us to do what she does throughout Alice in Ruby Slippers – to do “Six Impossible Things after Reading Alice.” The last of which is a question that Grellas has tried to answer and hands to the reader for their thoughts. “I’d like to know why lives collide – name Love our home, none left denied” (80). After traveling through Grellas structured poems and remade foundations, I’m certainly willing to try – will you be too? I strongly recommend reading this rich book aloud so you too can reveal the sounds – and silences – evoked in Grellas beautiful lines.

Epitaph for the Beloved

The 102 poems in Carol Lynn Stevenson Grellas’ Epitaph for the Beloved (Finishing Line Press, 2019) are divided into seven sections, each introduced by a line in the nursery rhyme “Monday’s Child” though the lyrics have been changed from present tense (“Monday’s child is fair of face”) to past tense (“Monday’s Child Was Fair of Face”) and thus we have a history, a looking back on a life, rather than a contemporaneous description of or a prediction of one. One other change is the wording of the last day of the week. “And the child that is born on the Sabbath day / Is bonny and blithe, and good and gay” becomes “But the Child That Was Born on the Sabbath Day, Was Fair and Wise and Good and Gay.” The change seems to be for clarity, though “blithe” and “wise” are nowhere near synonyms and I’m not sure what that comma after “Day” adds to the reader’s comprehension.

The reason I comment on this structure is that in any odd-numbered list there is a middle term as in the fifteen stories in Joyce’s Dubliners. The eighth story in that collection (“A Little Cloud”) is central to the meaning of that book. In this book, the fourth section (Thursday’s Child) is the center, the fulcrum from which all the other poems ascend or descend. The fourth section deals with the dissolution of the speaker’s marriage. Leading up to that section we have poems of childhood, motherhood, and grief, and following that section, we have poems of remarriage, nostalgia, and resolve.

Here are some examples:

Some of Grellas’ word choices are surprising and arresting as when she writes in “Mouse Queen” “you are an enigma of narrowing bones” or in these lines from “Caterpillar Prayers”:

You were a butterfly
in the meadow

where no viewer
could see your grace

save the birdlike seraph
perched on a nearby

At other times, an occasional cliché (“pearly whites”) or a solecism (“laying on a bed”) appears, and every once in a while the language becomes a little precious, a little strained, as in “the air blued and bruised / from lies” [“Conman-Duplicitous”] or “how no / amount of plea undoes the fate / of any willful heart.” [“Breached”]

Still, so much of the diction in these poems is winning.

Dog, I am sorry
that you have gone hungry.
I have been a glutinous[1] fool. [“Wild Thing”]

This is the kind of poem,[2] that will sleep with you
when no one’s looking.  [“Bad Poem”]

And so much of the sentiment in these poems is not to be resisted as when Grellas writes of her children, “They are the poems I’ve yet / to write as they will become a part of me / no matter what devastation the world / sends my way” [“If I Should Die before I Wake[3] Remember…”] and also when she writes memorably of herself, “A prelude to ecstasy is all that I ask.” [“Meet Me in the Countryside”]

As a “prelude to ecstasy,” read these poems of face, grace, woe, distance, loving, living, and wisdom, poems where “the moonlight knows your name.”